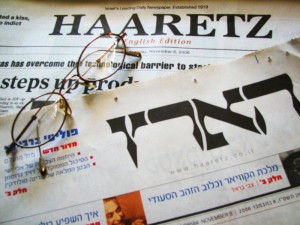 The crowding in the fast-food place where Amit (not his real name ) recounts his life story does not calm his fears that someone might eavesdrop on our conversation. But the tall man in his 30s, wearing a big knitted skullcap in a distinctly Hardal (ultra-Orthodox Zionist ) style, proceeds to talk freely about his sexual proclivities and his god. Before sitting down, like a good yeshiva boy he asks the waiter where he can perform the ritual hand-washing, and whether there is a special cup available for that purpose.

Amit is a gay man in a society that believes homosexuality is, as he puts it, "avi avot hatuma" (literally, "the grandfather of all impurity" ). For the past 20 years many local religious gays have slaughtered sacred cows and demanded to be recognized and accepted by their community. Amit is also demanding this and toward that end has even founded a new organization for people like him, an Internet-based support group called Kamoha – Orthodox Homosexuals. However, in contrast to other religious gays, he does not necessarily advocate coming out. Quite the contrary: He seeks rabbinic permission for many of the steps he and other gays are taking, including engaging in a relationship. He is now waiting for a rabbinic decision that could enable him and others like him to establish a family.

Kamoha (Hebrew for "like you" ) is the third organization in Israel to be established to represent and support religious gay men; Amit says its activities are aimed at ultra-Orthodox of all levels of devotion. Its predecessors are Hod (the Hebrew acronym for religious homosexuals ), created in the 1990s, and Havruta – Religious Homosexuals in Israel, founded in 2007.

Amit was a key activist in Havruta and even edited its website, but quit around two months ago when the group lent its support to egalitarian gay minyanim (prayer quorums ) where there is no barrier between men and women, and allowed people who had become nonreligious onto its board.

Filmmaker Chaim Elbaum ("And Thou Shalt Love" ), a member of Havruta, says the changes the organization has been undergoing reflect the journey that the religious homosexual community has experienced in general recently, trying to make room for people from various streams. A spokesman for Havruta, Daniel Jonas, says: "Each organization sets its own tone. I would like to believe that we have similar goals."

Beyond internal organizational politics, religious gays are divided on matters pertaining to Jewish law and the legitimacy of homosexuality, and issues of principle such as individual freedom and the right to happiness. The subject of sexual conversion therapy, also referred to as reparative or reorientation therapy, particularly divides the community. A major proponent of such treatment is the Atzat Nefesh organization, founded by Rabbi Shlomo Aviner, which has been severely criticized by Ze'ev Shveidel, a criminologist and social worker who is gay and religious. Shveidel has written on his blog that practitioners of this approach deceive people by promising success.

Amit says he doesn't oppose conversion therapies, despite having tried and suffered from them for years. As someone who followed a well-known path, including attending a high-school yeshiva and a hesder yeshiva (which combines military service with religious study ), he viewed his own homosexuality as a "contrary inclination" (meaning an unnatural tendency), a phrase commonly used by this public. At about the age of 18, he says, he had a sexual dream involving a male figure, and it was like waking up from a coma: "I had been naive until then. I felt attracted to somebody in my class but didn't know what that was. Just a sense that something was not right."

Following that revelation, he adds, "I felt I was different: unclean, an outcast, abnormal. I dwelt in a kind of terrible self-hatred, which over time turned into great anger at the Almighty. Why did he do this to me? I was depressed and lonely. Unable to tell a soul about it, certainly not my parents."

Even while he was grappling with this discovery, he says, "I remained the good little boy of the Zionist Haredi world, and my first thought was to seek out a rabbi. I thought it could be changed and that he would give me answers."

The man he met with over a lengthy period was merely the first in a series of rabbis and therapists whose doors he knocked on.

Amit: "I was at war with myself. I sought out therapists who would be active and give me assignments that would free me from an attraction to men." One sent him to the beach to photograph women.

"I was supposed to try fantasizing about girls," he says. "But the moment comes when you can't do this and begin to hate yourself. You feel you are not worthy of being part of the congregation of the Lord, entering the synagogue, going up to the Torah. I suffered so much that I wanted to kill myself."

Still in the closet

Today Amit accepts himself, although he has not really come out of the closet. As for the therapy he underwent, even if it did not help him, he sees no reason why others won't benefit from it: "I believe and know people who underwent therapy and succeeded in building a home in Israel with a woman. I didn't emerge scarred from this whole process. I emerged strengthened [in my faith] toward myself and toward the Lord." And he declares: "You can observe Jewish law, you can study Torah, and you can be gay."

Without a doubt, the changing social reality around him helped Amit to reach this conclusion. Nevertheless, he vehemently objects to such things as gay pride parades, which he says bolster the stereotype in religious society "of gays who jump all day long from bed to bed. I say that I have no interest in being with the naked [people]. I want a life of sanctity."

Amit adds that he does not engage in homosexual intercourse because it is forbidden in the Torah.

Filmmaker Elbaum rejects some of Amit's views because he says they undermine what religious gays have achieved: "It is important to march in the pride parade and to come out of the closet, because the whole business of the closet and concealment, and [the activities of] Atzat Nefesh means hiding who you are, and that leads to a very dangerous abyss."

Elbaum also thinks that religious gays should not be subservient to rabbis. "Rabbis find it easier to accept Kamoha … Why are they [Kamoha] afraid of taking a stand? Because it could supposedly persuade people to switch sides, as though it were a matter of choice and not something inborn."

In Elbaum's way of thinking, religious gays who do not request the rabbis' consent for every move can pursue couplehood and raising a family, whereas Amit and his friends wait shamefaced to hear the position of rabbis who oppose this.

However, for his part, Shveidel, who strongly disagrees with Amit about conversion therapy, identifies with his insistence on remaining in their orthodox communities, which Shveidel calls a subversive decision. During the afternoon prayer service last Yom Kippur, he adds, when the verses about homosexual intercourse were read, he rose and wrapped himself in a prayer shawl to stand out in the crowd of worshippers.

"The rabbis would like not to see, not to hear about gays," Shveidel says. "It is precisely those people who remain on the inside and ask for answers who are harder to dismiss."

"Merely acknowledging us is not enough," Amit notes, adding that although he is prepared to make certain heavy concessions, he by no means sees himself continuing for the rest of his life lonely and alone. He says he has a partner, with a rabbi's permission, but they do not live together. Meanwhile, of course, the issue of consummating such a relationship has yet to be a matter of rabbinical consideration. For rabbis, indeed, same-sex couples raise a red flag.

Recently, scores of prominent rabbis signed a document that was drafted in the United States with the aim of formalizing a more liberal approach to religious gays – an immense step toward recognizing their rights. Among the signatories was Rabbi Yuval Cherlow, head of Yeshivat Petah Tikva, who is considered a leading social force on the subject of religious gays.

Paragraph 11 of the rabbinic statement of principles says: "Halakhic Judaism [i.e., Judaism according to traditional religious law] cannot give its blessing and imprimatur to Jewish religious same-sex commitment ceremonies and weddings, and halakhic values proscribe individuals and communities from encouraging practices that grant religious legitimacy to gay marriage and couplehood. But communities should display sensitivity, acceptance and full embrace of the adopted or biological children of homosexually active Jews in the synagogue and school setting, and we encourage parents and family of homosexually partnered Jews to make every effort to maintain harmonious family relations and connections."

Cherlow points out with regard to couple relationships, that "Jewish law shall not be abrogated." He speaks approvingly of Amit's life in that prohibition's shadow: "To be a believer is certainly also a difficult experience and not always pleasurable," he says, and adds that "the next step we [Kamoha] are examining is setting up a matchmaking site for those interested in having children."

The plan is to help gays and lesbians start single-parent families – to have children by means of insemination and not intercourse, and to raise them without partners. This option has also received support from Rabbi Menachem Burstein of the Puah Institute, which helps couples with fertility problems find solutions sanctioned by Jewish law.

None of the people whose opinions are expressed here deleted the word "sin" from the discussion of the consummation of a same-sex relationship. Amit says "there is no prohibition on being attracted to a man," and insists that "even if a person puts his attraction into practice, that's a long way from disqualifying him as a person. Violating the Sabbath is [a decision that is] far more subject to choice than acting on a primal desire for love. Slowly, rabbis are grasping this."

Elbaum thinks all the difficulties for religious gays stem from the fact that "the rabbis' main fear is that we will destroy key things such as the institution of family and proscriptions concerning modesty. We are asking that they deal with us in a realistic manner. Maybe we will do things our way. What can you do? We're different